Oh, how I loved her.  From the minute I first saw her at the humane society, she caught my eye with her lovely golden legs and sleek reddish-brown and black speckled back, but it took me a while to bring her out to meet her.  She was all over the place, more hyper than anything I’d seen.  She went berserk, running throughout the ‘greeting room’, stopping now and then to sit on the floor and spin in circles as she gnawed at her leg.  “Well that’s new”, said the room attendant.  It took only a little convincing for my mother to agree that yes, we needed a dog.  I made clear that I did not want her for myself, but that she would be a family dog.  I would be heading off to college in a year or two, and I knew they would need the company.  My step-father however did not agree so readily.  To this day, I cannot remember how we finally won him over.  But, she came home with us the Monday after Thanksgiving in 2004, my last year in high school.  Her name was Effie, but we changed it to Lola.

Lola was a neurotic dog.  We know nothing of her history, and only guessed at her lineage, calling her a rottweiler/blue heeler mix.  She was very smart- if you told her ‘down’, she was down.  If you said ‘stay’, she wouldn’t move til you gave the ok.  Her best trick was when I said ‘bang’ and pointed at her, and she would keel over.  More than anything in the world, she loved car rides.  The minute I picked up my car keys, she would jump up, half crouched with her ears pricked forward and an intense look in her eyes I can only imagine would be matched by a mother bear.  If I gave her the “let’s go Lo”, she would start rearing and spinning and jumping and race out to the car, her little stump of a tail wagging furiously at the back door.  As much as she loved them, I cannot say I loved bringing her on rides.  She would try to attack passing cars, crouching down in the back and leaping up to growl as they passed.  She never lost this habit, even after 8 years of serious training.  Her second favorite thing to do was to attack your feet under a blanket.  If you moved your feet, she would pounce, chasing them around.  Sometimes she would get so excited she would grab the blanket and jump off the bed, dragging it and shaking it ferociously. We all love what we’re going to love.

On trails, she was the best dog.  Once we worked past her dog aggression, which was more like an inability to communicate effectively with other dogs since she liked to growl a lot, we would happily jaunt down the trail, and she never once strayed too far from my side.  One of her favorite trail games was to lie in wait behind a tree and jump out at me as I walked past.  I returned the action, waiting until she was ahead of me, then I’d hide behind a tree and wait for her to come back realizing I was not behind her any more.  I would jump out at her, and we’d run off like bats out of hell, having ourselves a good ole’ time. 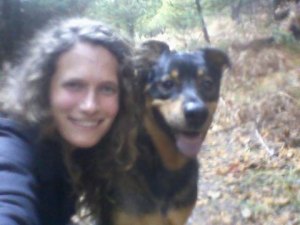 And so we went on like this for several years.  She loved me best, I know this with certainty.  Though she saw me only occasionally when I came home from school, my homecoming was a cause for a celebration in her mind equivalent to the greatest New Years Eve party on earth.

While Lola loved people, she had this habit of growling at you, which scared a lot of people away.  My mother just said it was her way of communicating because she didn’t know any better and she wanted to talk to us.  My mother also liked to call just to tell me things like how Lola would clean off her back feet on a towel, like she just KNEW what to do.  According to Mom, Lola was the smartest dog in the world and there was no arguing.

And then, about 3 months ago, the vet told us she had a bone cancer that was common among rottweilers.  He gave her six months.  She deteriorated quickly in the next few months, not wanting walks anymore, but still pleased as can be to sit at the window and bark and the squirrels that dared to come to close to the window.  She got worse every week, and the plan was to wait until I came home this Friday so we could all bring her in.  My mother called me last Thursday, crying and saying she was so sorry, so so sorry.  The night before, Lola wouldn’t let anyone near her.  They said she had the look in her eyes that said she had had enough of the pain, and something needed to be done about it.  They took her in that morning and had her euthanized.

I haven’t cried much.  I’m just happy to know that she is pain-free now, and hopefully checking in on me. I know not what her first two years of life were like before we found her.  But once we brought her home, she was our Lola and no dog was more loved and spoiled.  She may have been bat-shit crazy, and drive you absolutely crazy.  But oh, she was loved so very much, and will be remembered forever.

I am a learner.
View all posts by aletalane →
This entry was posted in General blogs, Thoughts from the soul and tagged cancer, dogs, euthanization, family, saying goodbye. Bookmark the permalink.

1 Response to To say goodbye